The Land Rover Series I was launched in 1948 with single 80-inch petrol-powered model. It rapidly outsold the car sales for the Rover company, and paved the way for introducing further models. 1954 saw the 80-inch replaced with an 86-inch chassis, and the launch of the 107-inch Pick-up variant. 1953-54 also saw improvements to the engine and drivetrain to further improve the appeal of the new vehicles. 1956 and 1957 brought the Station Wagon model and a change to 88 and 109-inch chassis. These chassis dimensions were to be used on all Land Rovers for the next 25 years. The first diesel engines appeared in 1957, and although it was a significantly more modern engine, diesels didn't become the popular engine choice until the mid-1980s.

The Series II ran from 1958 - 1961 and the IIA from 1961 - 1971. The range continued to offer 88 and 109-inch models, with utility and station wagon variants. At this point, the Land Rover was effectively redesigned to modernise and upgrade the interior and exterior. During the life of the II and IIA, there was a progression of upgrades to the drivetrain, and an explosion in the number of possible variations and options.

By the time the Series III rolled off the line in 1971, Land Rovers were an internationally recognised vehicle, with 440,000 Series III Land Rovers being built between 1971 and 1985. This generation saw big improvements in refinement and comfort options in bid to remain competitive with the emerging leisure 4x4 segment.

A huge number of these vehicles are still on the road, kept alive by commercial users and enthusiasts alike. There are also a huge number of genuine, OEM, and aftermarket parts available for them as well - from comfort and convenience accessories to hardcore off-road modifications. 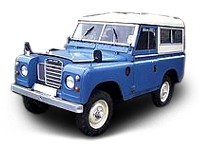